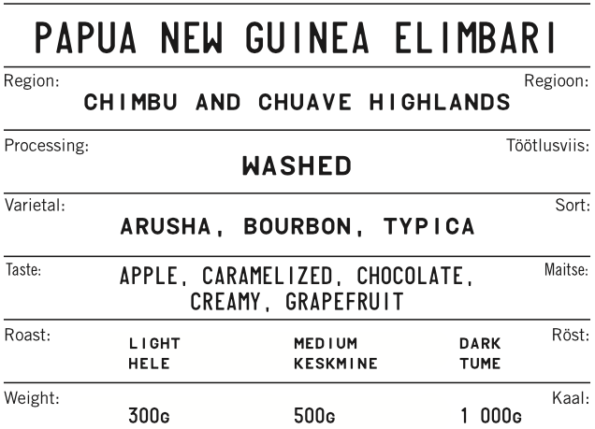 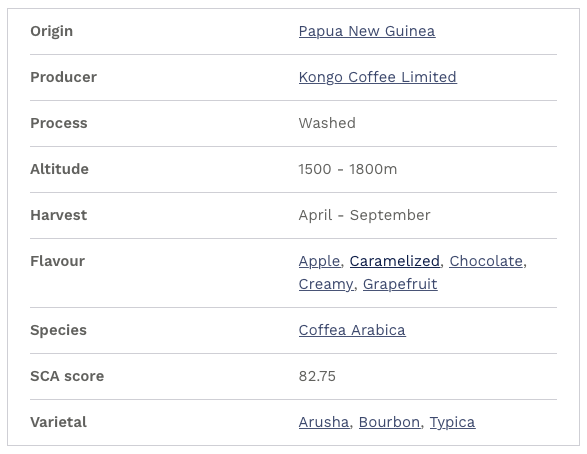 Close to the border of Eastern Highlands Province, the district of Chuave lies, central to Papua New Guinea and within the New Guinea Highlands that stretch across the island of New Guinea, second largest in the world.

The Highlands themselves are actually a chain of mountain ranges, and the Bismarck range, with Mount Wilhelm as its highest peak, is where the coffee growing slopes that produce the cherry for Elimbari are.

PNG is what is known as a megadiverse country – one of 17 identified countries that exhibit over 5,000 endemic plant species and bordering marine ecosystems.

Coffee is grown mainly by smallholders in ‘gardens’ – a small plot of land that contains everything from a few trees up to a three-hectare plot at most. There are a few more traditional plantations, but these account for just under 20% of production. Once picked coffee is pulped, and then dry fermented for 24 hours in wooden or plastic boxes before being washed and dried on sails – stretched tarpaulin drying beds. Coffee is then sold to collectors and taken to the renovated dry mill facility belonging to Kongo, who cup, select, process and hand sort where necessary before bagging and exporting the coffee.

Arusha is an interesting varietal. Assumed to be from Typica lineage, it occurs in both Tanzania and Papua New Guinea but other than that, information is vague at best. Both countries share a mixed German British colonial background and Arusha itself is a city in Tanzania, not far from Mount Kilimanjaro and the border with Kenya. Most varietals were introduced to the country in the 1950’s from African and Australian research stations, though coffee is first recorded in PNG in 1873, and was growing in the Rabaul Botanical Gardens by 1890, but was not grown in Simbu until the 1960’s. More confusingly, French Missionaries planted coffee in the Kilimanjaro area in the 1890’s and you sometimes see that given as the source for Arusha; this was assumed to be from a Bourbon heritage, though other countries have had coffee tested from this lineage and had that proven to be of Typica lineage.