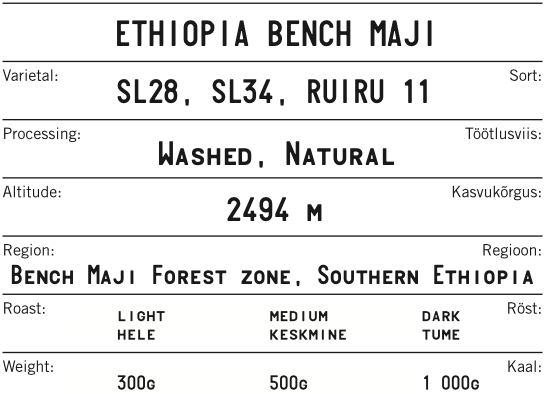 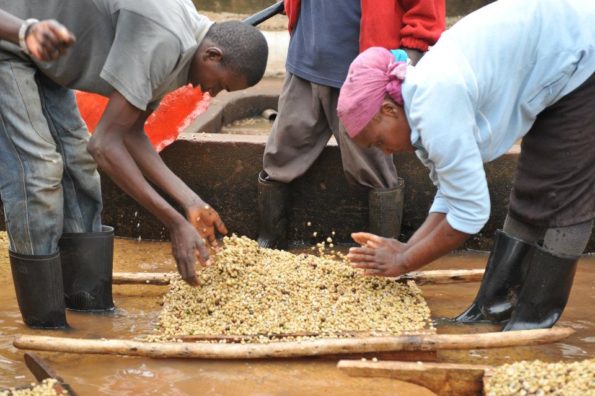 These beans are characterized by their flavor clarity, showcasing bright, complex notes. The final cup is very clean tasting.

Bench Maji Zone is one of the few Zones in Ethiopia which has been kept with its natural dense forest when the rest regions are cleared of land for several purposes.

In the late nineteenth century, about 30% of Ethiopia was covered with forest. The clearing of land for agricultural use and the cutting of trees for fuel gradually changed the scene, and forest areas have been dwindled for several years and are less than 10% of Ethiopia’s total land. However, currently it has widely worked on, to reforest Ethiopia and mainly the northern parts of the highlands which were once almost devoid of trees. However, about 45,000 square kilometers of dense forest grown naturally exist mainly in the southern and southwestern sections of the highlands. Some of these include coniferous forests, found at elevations above l, 600 meters, but a majority of the forestland consists primarily of woodlands found in drier areas of the highlands and in the drier areas bordering the highlands.

Bench Maji Zone is in south western Ethiopia where naturally grown forest (presumably hundreds of years old forest) still exists; and the Coffee inside such forest is naturally grown as well.

Forest Coffee in Bench Maji is a coffee harvested from trees growing in such forest, with almost no management of the surrounding forest or vegetation, except some removal of undergrowth to facilitate access to the coffee trees.

The Bench Maji Coffee, currently known as Forest Coffee was once been wild and owned by no body. However, the farmers around the forest have been coordinated by government bodies and become cooperatives to own the coffee inside the forest. There are different environmental activists and /or NGOs working with Cooperatives for the conservation of the Bench Maji Forest. For example, the wcc project and PFM (participatory Forest Management) works with the cooperatives.

Today, coffee inside the Bench Maji Forest is owned by several small holder farmers who are incorporated in Primary cooperatives. These Cooperatives established a Union Known as Bench Maji Forest Coffee Producer Farmers’ Cooperative Union Ltd; and it is this Union which exports their products in behalf of them.

Wild coffee in Bench Maji is so named not because it is a coffee substitute but because it has grown inside wild forest 100% without any human intervention (without any management).

There are dense forest areas around Gizmeret Cooperative in Sheko District which are farther from the homes of farmers. There are various animals and Bird species inside the jungle. No man goes inside the forest for coffee management but the coffee grows naturally and bears product by itself. Farmers go to the wild only during the crop season just for harvesting. The Coffee tree of wild coffee is long and similar with other forest trees; and farmers use ladder for picking the cherries.

The yield is very low and it takes very long time for farmers to go through out the vast wild forest in order to collect higher quantity.